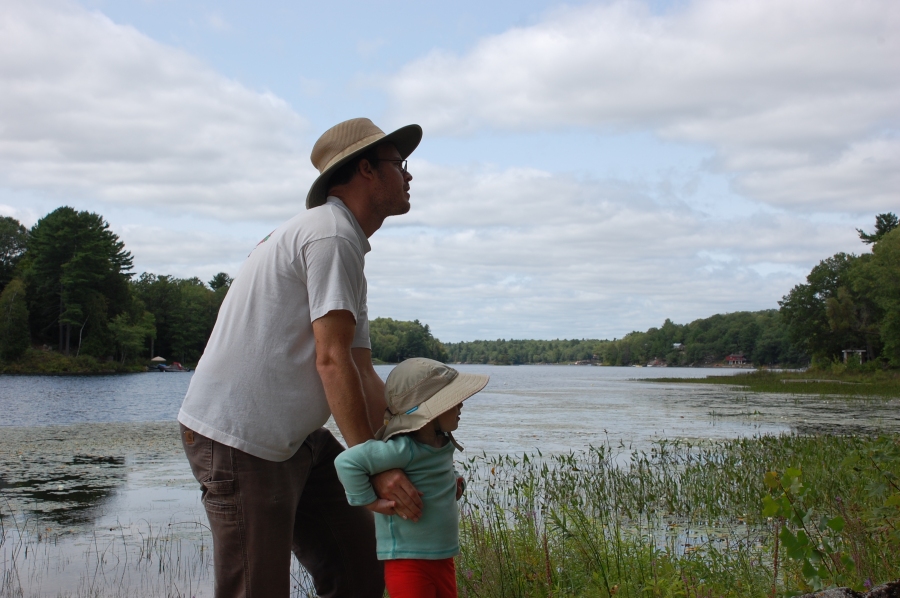 I am a generalist biologist living in Peterborough, Ontario, Canada. I am currently employed as a Terrestrial Ecosystems Science Specialist with Ontario’s Ministry of Natural Resources and Forestry. Outside of my job, my family and I are interested in figuring out what lives in our yard and how to get more of it.

I am addicted to field guides, and I’m a bit of a snob about children’s books.  I’m also a terrible soccer player.  And a less-terrible (I hope) father of three, with my amazing wife.

I don’t do research, but rather I use the best available science to solve natural resources problems for southern Ontario.  I’m in-between the Ministry’s researchers and the Ministry’s local district staff who deal with on-the-ground challenges.  I love my job.

I handled recovery strategies for Ontario’s species at risk. I worked at the interface between science and policy, evaluating species’ threats and what approaches might mitigate those threats. I also worked briefly in Fisheries Policy, assisting with aquaculture policy among other things.

The Canadian Field-Naturalist is one of the longest-running peer-reviewed ecological journals in North America, and the premier journal for the natural history of species in Canada. I volunteered as Manager during my Ph.D., and led several projects including creation of a journal website, development of a new subscription management system, and creation and running of the highly-successful @CanFieldNat twitter account. I was fortunate to work with a great team including Dr. Carolyn Callaghan (Editor-in-Chief, currently with Canadian Wildlife Federation), Dan Brunton (Publications Committee Chair and fern jedi), Wendy Cotie (layout), and others. Together we eliminated the journal’s publication delay, expanded its dissemination, and solicited more articles from a broader range of authors. This journal is a feisty David in a world of Goliaths; a non-profit, volunteer-run journal published by The Ottawa Field-Naturalists’ Club amid mega-publishers like Elsevier.

Polar bears are a politically volatile subject. The hunting of polar bears is even moreso. I advised on the international trade of polar bear, under the Convention on International Trade in Endangered Species of Wild Fauna and Flora (CITES). Key elements included climate change, Inuit livelihoods, wildlife trafficking, population models, traditional Inuit knowledge, engagement with NGOs and resource users, and diplomacy. My colleagues were model public servants, working hard to provide advice with integrity.

Get first year students to know how to do stats in Excel. That was my task, overseeing bi-weekly stats tutorials for hundreds of students in introductory biology. I created innovative YouTube tutorials about Excel-based stats, to complement classroom tutorials. These were highly-rated by students in course evaluations, produced greater learning achievements than previous approach, and have been viewed more than 300,000 times by students and others. I also experimented with pedagogy, comparing learning achievements between sections taught with traditional and active learning approaches. My wonderful team of lab demonstrators helped make this job one of my favourites.

I taught undergraduate labs for numerous courses including ecology, evolution, genetics, entomology, and anatomy. I quickly learned the value of seeking students’ anonymous feedback of my teaching, so I could adjust mid-term. Overall, my students rated my teaching as 9.2 / 10. I love teaching, and completed several courses in an effort to continually improve. I was also a facilitator or panelist for several teaching workshops in Ottawa, targeted to teaching assistants in the sciences, and I spearheaded a successful effort to create a graduate student teaching award at Memorial University of Newfoundland. Frankly, I miss teaching in my current job.

I helped teach English at a rural town’s junior high and elementary schools. After failing miserably, and hearing other foreign teachers’ tales of failure, I led an effort to compile successful English lesson plans from the region’s teachers. I compiled submitted lesson plans and was sole editor of the resulting book, which was published by the Ministry of Education (Ehime Monbusho) and distributed to >100 schools. I also smashed a ceremonial devil-cow in the town square (but I was supposed to).

I’ve worked a metric tonne of jobs including a restaurant where I had to sing about how good the food is, selling dog licences door-to-door, and running a rickshaw.

Most of my thesis focused on macroecology, finding out which butterfly species are shifting north with climate change in Canada (and whether there are any trait-based or phylogenetic patterns that distinguish them). I published research on several topics (see Publications page for full list), including the following.

I studied modes of reproduction in the zooplankton Daphnia pulex, under the kind supervision of Dr. David Innes. Within the context of biogeography and natural history, my lab experiments targeted evolutionary processes.

Doing an Honours thesis with the incredible Dr. Virginia Walker is what turned me on to biology. Getting to answer questions nobody has ever answered before – how cool is that! I investigated antifreeze proteins’ gene expression in the spruce budworm under different larval stages and temperature conditions. I also helped castrate a cow. And I wrote some science articles for The Journal, the main student newspaper on campus.

Any content or opinions expressed on this site are my own unless otherwise stated, and do not reflect the views of my employer or other organizations.